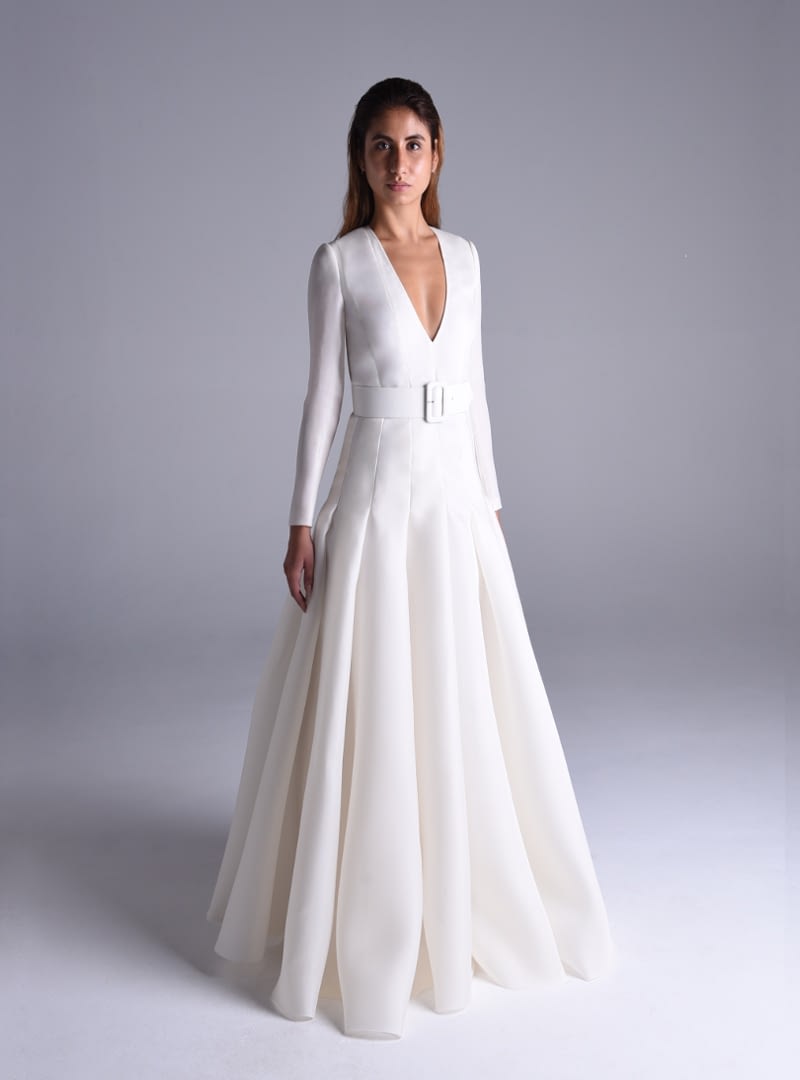 Fedra is a classic cut suit, made of silk gazar. The body line accompanies the tracing of the skirt giving continuity to each fold with a seam. As many folds as the skirt has of pieces the body, which are 12.

If craftsmanship is the desire to perform a task well, just to do it well (Sennett 2009), Haute Couture is a conversation between craftsman and matter.

The main characteristic of Fedra is how the layer pattern of its 7-metre skirt has been resolved, which includes folds in its layout that, when closed 24 centimetres from the waist, draw a suggestive line that draws it, running along the hip in search of the thigh.

The body of the dress, which has a classic cut, accompanies the outline of the skirt, giving continuity to each fold with a seam, outlining the female figure in detail. As many boards as the skirt has, the body has costadillo pieces, which are 12.

Each seam is an opportunity to define the bust of the woman; in the front, the cleft that precedes the top of the chest, the convex curve that follows, the contour of the chest under the chest to reach the waist, and in the back the subtle arch that is guessed from the base of the neck and scapula to the lumbar zone.

In search of a traditional line, Fedra projects a straight, clean shoulder and a studied armhole that houses an authentic tailor sleeve reproducing the natural semiflexion of the arm.

A pronounced “V” neckline on the front, which surpasses the top of the chest, culminates in the design of the feminine and minimal body capable of making an impressive bride shine.

Fedra Haute Couture is built with silk gazar, the fabric representative of the master Cristobal Balenciaga for its regal and semitransparent appearance, its uniform touch and the tiny relief of its framework.