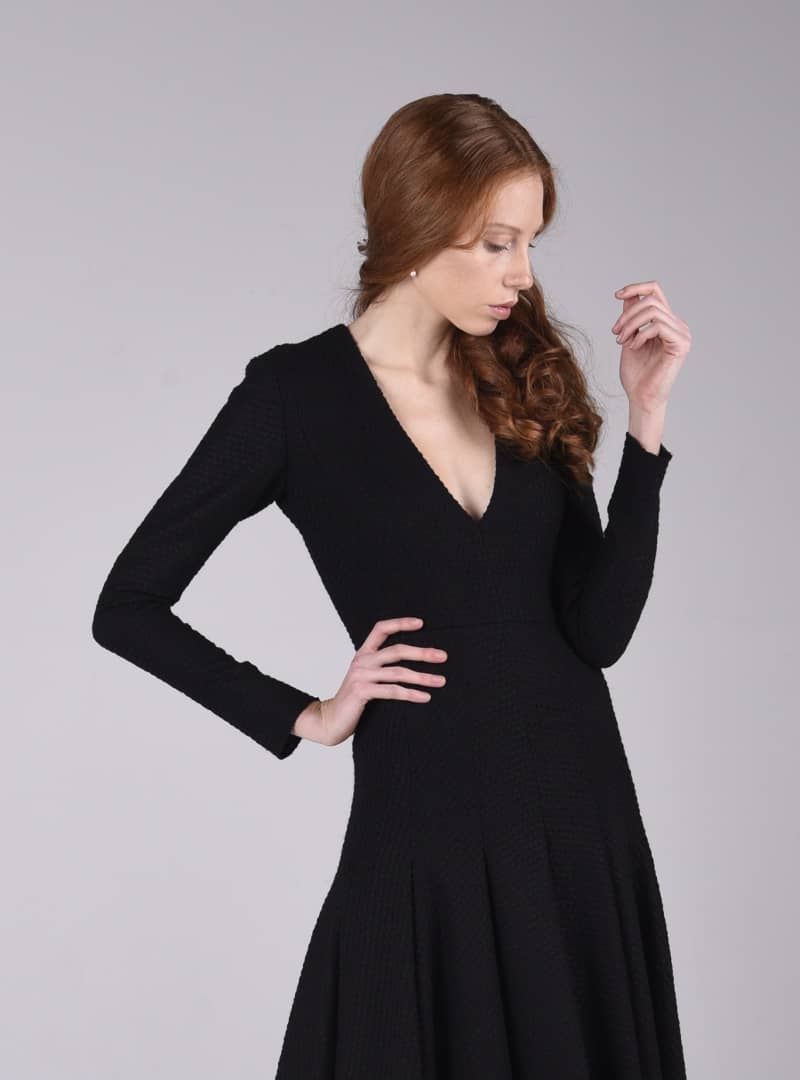 Fedra is a classic style piece, with a V neckline and long sleeves, which defines the female silhouette without giving up the maximum volume at the bottom of the skirt.

On this occasion i wanted to work on a layer pattern that I don’t usually use because it’s not flattering in general. It inflates hips where there are no hips and where there are hips it affects rather well.

It will be essential to be precise in its construction in order to close them all equally and then cut the garment with a fabric that facilitates, if possible, the manipulation of its confection, given that it is a considerable volume, and that, on the other hand, it is aesthetically beautiful enough so that it is at the height of the effort.

The body of the dress, which is of classic cut accompanies the tracing of the skirt giving continuity to each fold with a seam, profiling with detail the female figure. As many planks as the skirt has of costadillo pieces the body, which are 12.

The more lines the waist draws, in this case, the better I can make it feel. Each seam is an opportunity to define the woman’s bust; in the front, the cleft that precedes the top of the chest, the convex curve that follows, the contour of the chest under the chest to reach the waist, and in the back the subtle arch that is guessed from the base of the neck and scapula to the lumbar zone.

In search of a traditional line, I project a straight shoulder, clean. It follows a studied armhole that shelters the arm and its free gesture in a natural way. The perfection and harmony of the corresponding sleeve will depend on the precision of the layout.

I am powerfully attracted to the naked beauty of necessity.

And once delimited the situation and route of the armhole in the body of my pattern of Haute Couture, I determine its sleeve.
The peculiar form and route of his open cup, his 2 seams reproducing the semiflexion of the pending arm and his sufficient contour will redound in comfort and beauty.

A pronounced “V” neckline at the front overhanging the top of the chest culminates the design of the feminine and minimal body.